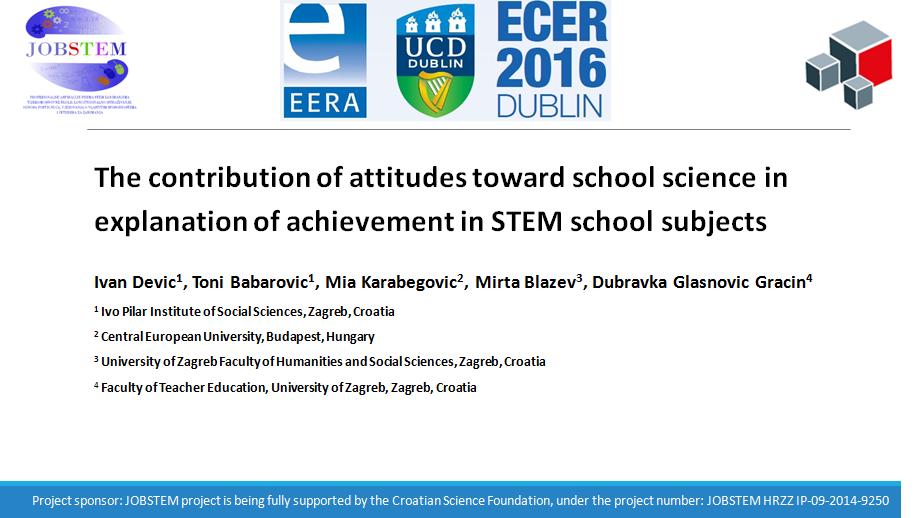 STEM achievement of Croatian students has consistently been shown to be low in comparison to their other school subjects - in both specific scientific studies (Burušić, Babarović, & Šakić, 2008), and larger international research projects (e.g. PISA). The debates about what determines achievement in STEM school subjects in primary school still persist. Several STEM-relevant variables show a significant association with achievement in math and science, including student level variables, school level variables and variables related to their broader social environment (Hattie, 2009).

The specific aim of our study was to identify the contribution of students’ attitudes to school science and experiences with STEM subjects in explaining STEM school achievement, after controlling for individual characteristics, family-related variables and experiences in out-of-school activities. The variables used correspond to Huitt’s (2003) Transactional model of the teaching/learning process, a framework which posits several different domains which produce learning outcomes: input (students’ and teachers’ individual characteristics), context (environmental factors that might have an influence on the outcome) and classroom processes.

We collected data from 360 primary school students (aged 12 to 15; M=13.32; 165 female) enrolled in three schools from the Daruvar municipality, Croatia. Scales used as predictors in the survey were mostly derived and adapted from the ASPIRES project (Archer et al., 2013; DeWitt et al., 2013), and the output, STEM school achievement, was measured as a composite of school marks (GPA) in different STEM subjects in the previous grade.

The predictors used in the study encompassed students’ gender, the education status of their parents, parental ambitions and support of the students’ education, parents’ attitudes toward science, students’ positive and negative image of scientists, interest in science outside of the school context, and attitudes toward school science.

Hierarchical regression analysis was applied in order to predict achievement in STEM school subjects, with the first block of predictors pertaining to input and contextual variables, and the second block being the attitudes toward science in the school context.