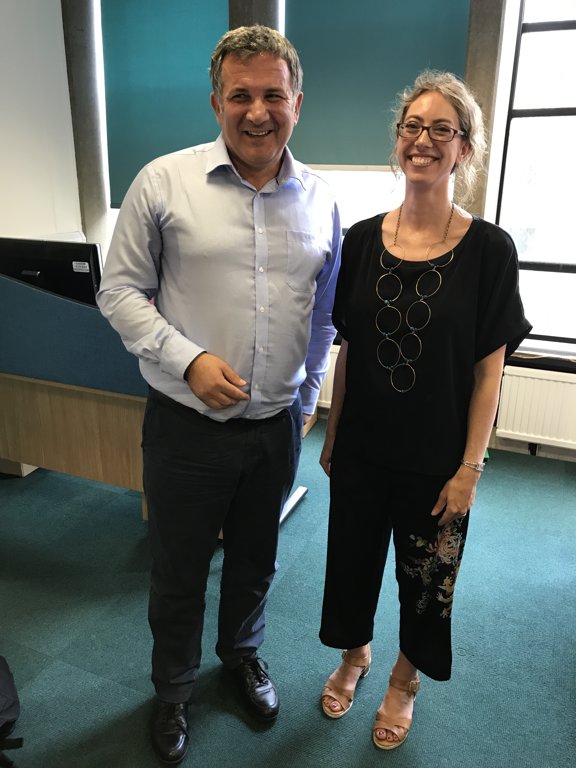 JOBSTEM project leader Josip Burusic met with Louise Archer, leader of the ASPIRES project, at the Institute of Education, University College London. After a short meet-and-greet, the main goals, methodology and members of the JOBSTEM project were presented, as well as the relevant information about the ASPIRES project.
The conversation focused on three topics of mutual interest. The first one discussed was the possibility of cooperation, including visits by the JOBSTEM researchers to London and vice versa. In this vein, professor Burusic invited professor Archer to visit Zagreb, where several STEM-related events would be organized to cover the research topics of the two projects. The possibility of co-authoring publications related to the research concepts utilized by both projects was also discussed.
The second point of the meeting included conversations on the prospects of future collaborations when it comes to dissemination of the insights stemming from the ASPIRES and JOBSTEM projects. Specifically, this would include preparing materials for teachers which utilize the results of the studies. Professor Burusic expressed the intention of the Croatian team to start an online platform focusing on STEM-related activities, a nation-wide hub for teachers and other interested parties working in STEM education and STEM fields. Professor Archer related the information about similar activities from the ASPIRES team in this area, with a special mention of the 'enterprisingscience' project which has been going on for some time.
In the final stage of the meeting, the two PIs considered other ways in which a collaboration might be fruitful, in the context of joint European projects, as well as applications for projects financed in Croatia through structural funds and similar resources. To this end, an overall agreement was reached to explore the option of starting a new „COST“ action dedicated to STEM, which would provide an excellent platform for future collaborations, as well as opportunities to connect with other European research centers and include them in the research activities connected with STEM topics.

More on the ASPIRES project

The ASPIRES project is longitudinal UK study combining two phase of project – ASPIRES 1 and ASPIRES2. The first ASPIRES study tracked the development of young people's science and career aspirations from age 10-14 (from 2009-2013).

The ASPIRES 1 was a five-year study funded by the Economic and Social Research Council (ESRC), Research grant number RES-179-25-0008, as part of the Targeted Initiative on Science and Mathematics Education (TISME), a research programme funded by the ESRC in partnership with the Institute of Physics, Gatsby Charitable Foundation and the Association for Science Education (tismescienceandmaths.org).

The study combines quantitative online surveys of a student cohort and repeat (longitudinal) interviews with a selected sub-sample of students and their parents. Survey and interview data were collected at three time points: the end of primary school (age 10/11, Year 6), the second year of secondary school (age 12/13, Year 8) and the third year of secondary school (age 13/14, Year 9). In total, over 19,000 surveys were completed: 9,319 by Year 6 students, 5,634 by Year 8 students and 4,600 by Year 9 students. A sample of 83 students and 65 of their parents were also longitudinally tracked via interviews across this age range (10-14). In addition to researching influences on students’ aspirations, the project also worked

with a small group of London teachers to develop approaches for integrating STEM careers information into Key Stage 3 Science lessons.

ASPIRES 2 is continuing to track young people until age 19, to understand the changing influences of the family, school, careers education and social identities and inequalities on young people's science and career aspirations.